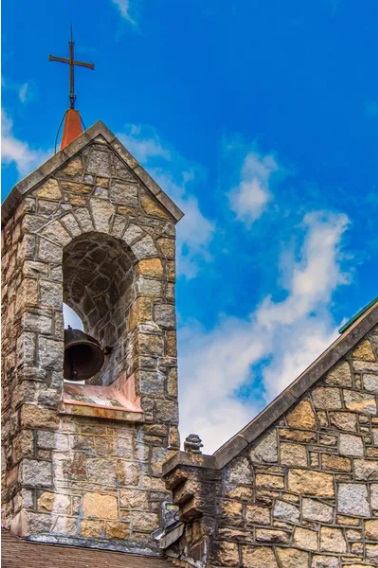 One of the many things we love about our beautiful and historic church is the traditional bell tower. The brass bell was made in 1939 by the Stuckstede Brothers Foundry of St Louis, MO and is still functional. The bell has been rung over 80 years by three different church denominations during depressions, wars, boom times, and now through a global pandemic.

When Wake Forest Christian Church began worshipping in the building in 2013 and then bought it as our permanent home, the sound of the bell being rung to start our worship time became an anticipated part of our experience. Our brother Leon takes some of the older children each week to perform the important task of ringing the bell. It takes more strength than you might think!

The couples who choose our sacred space to have their weddings love celebrating the end of the ceremony with a groomsman stepping into the alcove to ring the bell.

There have been some periods of silence of the bell. In 1979 lightning struck the church causing extensive damage to the bell tower area taking about 9 months to repair. In the 2000s there were some years that the building was not owned by a church and was used as a wedding venue. After the nation went into quarantine due to the Covid 19 pandemic, we began meeting virtually through online worship for what we didn’t know would end up being about 10 months. For a week or two after we went virtual, we missed the bell ringing. When we began ringing it again for the recorded service, hearing it as we watched from our homes made it seem like we were worshipping together again.

We reach out to the community in service, to be good neighbors, and to be an inclusive, sacred space of refuge for those who are seeking the divine. We ring the bell as an invitation to everyone listening to stop for just a minute, take a breath, and perhaps think about the God who unites us all.